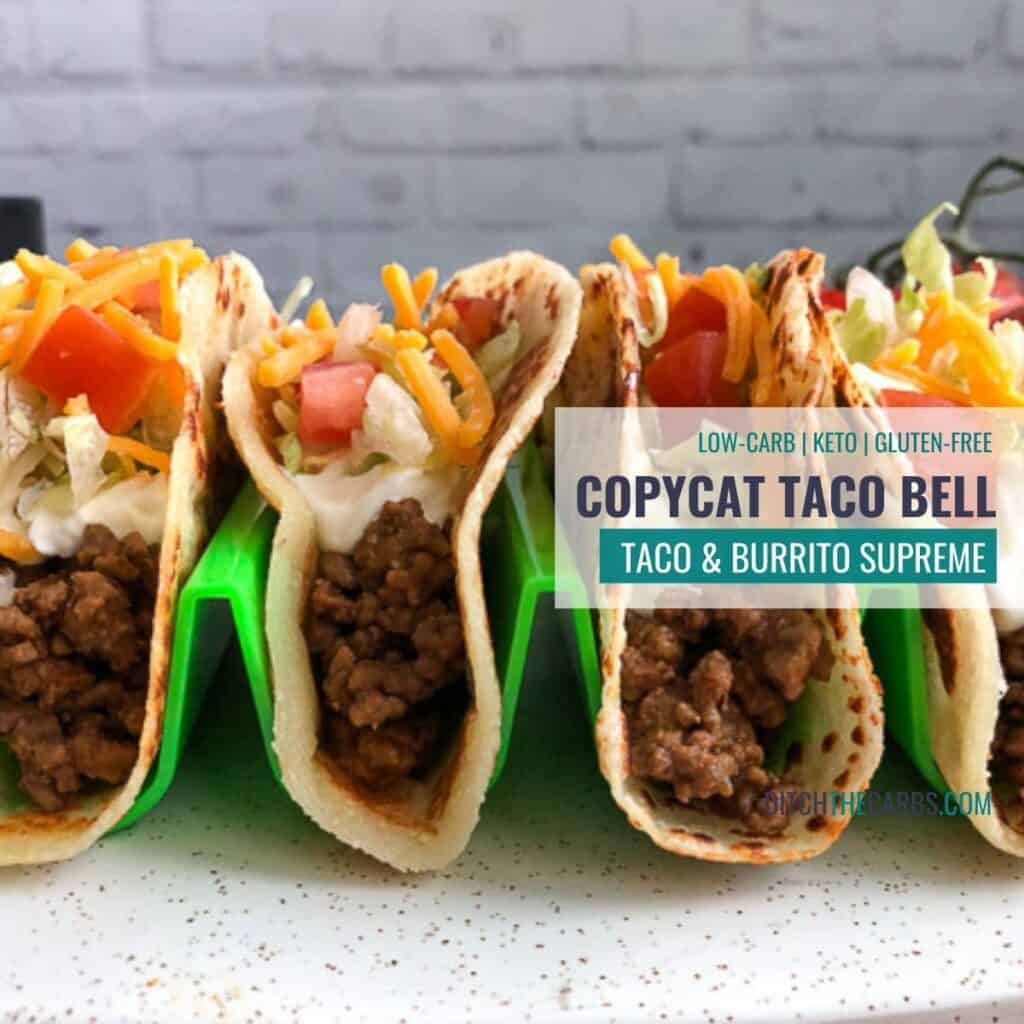 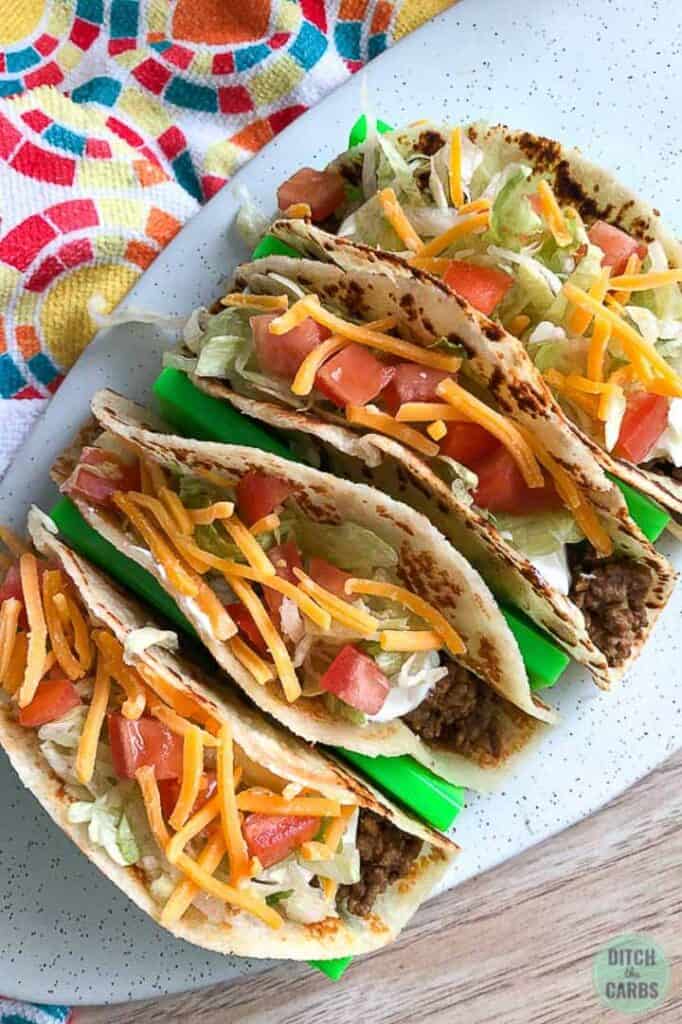 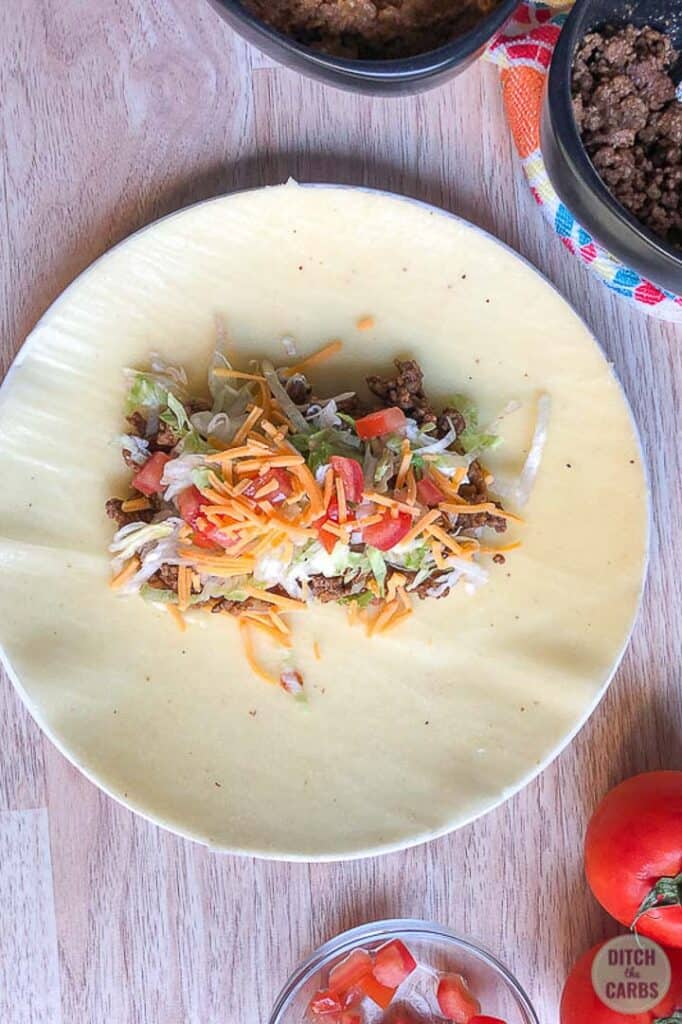 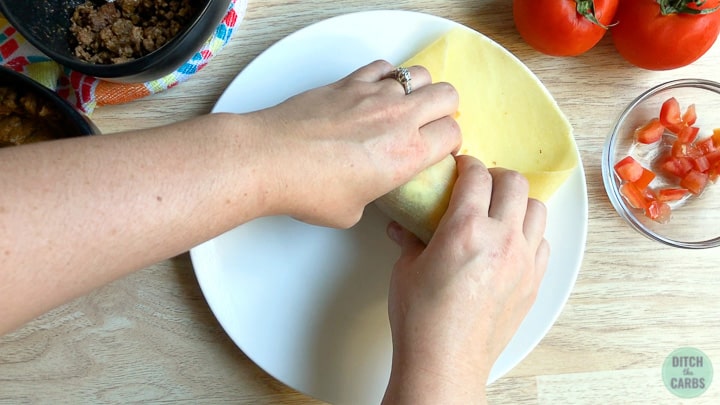 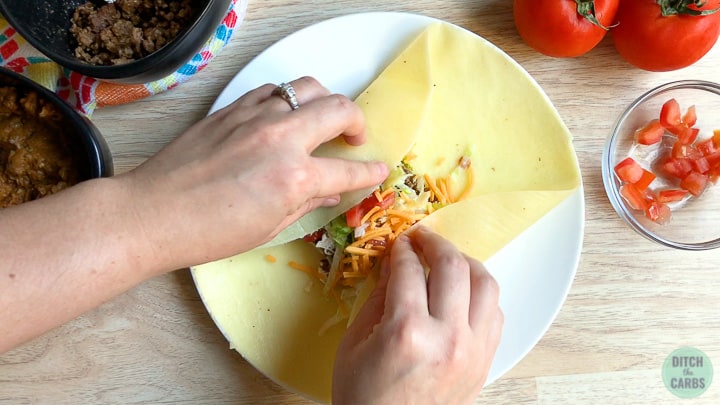 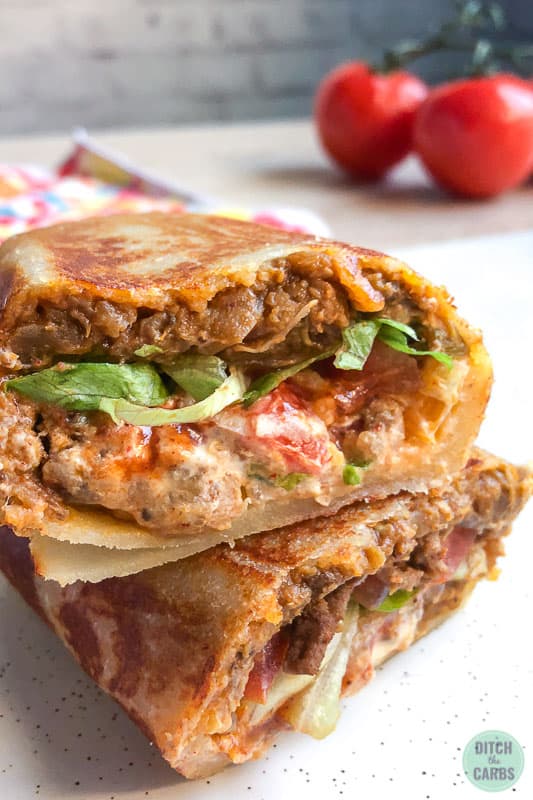 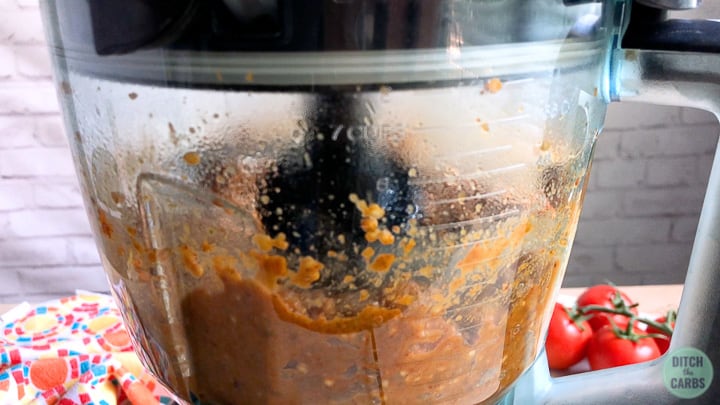 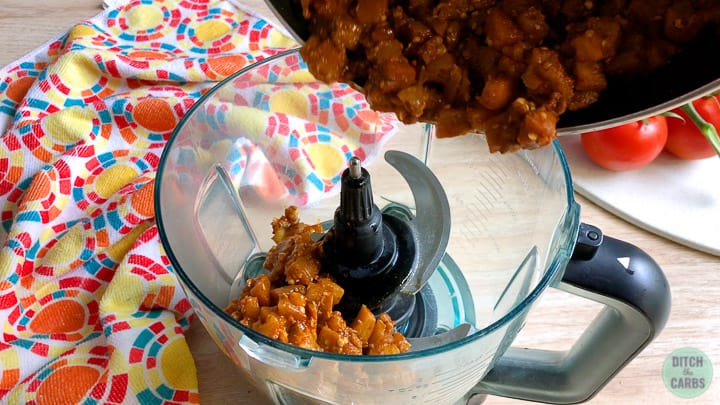 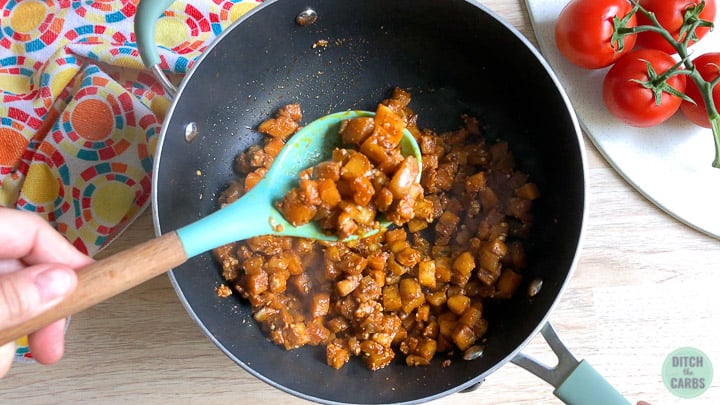 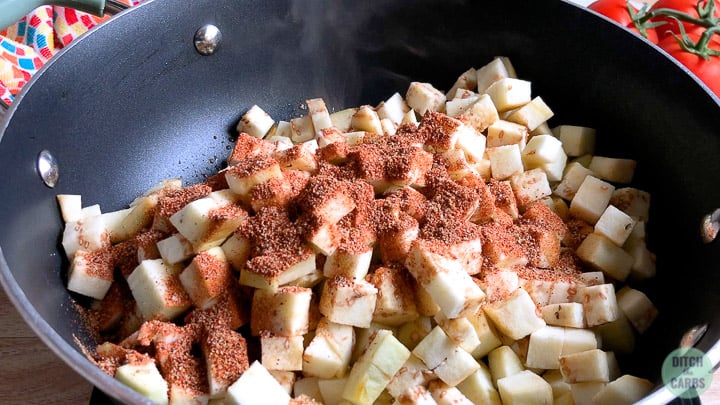 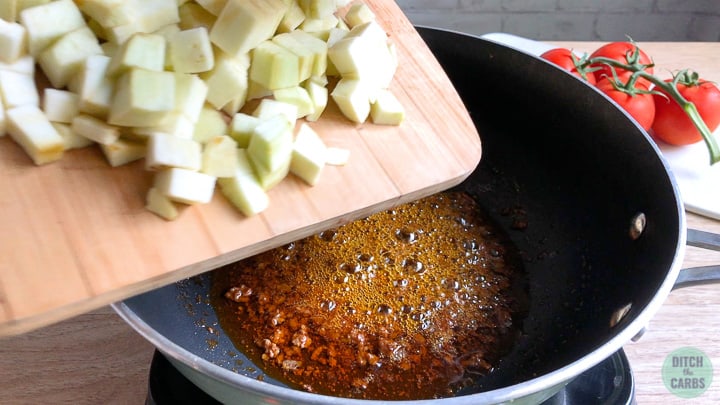 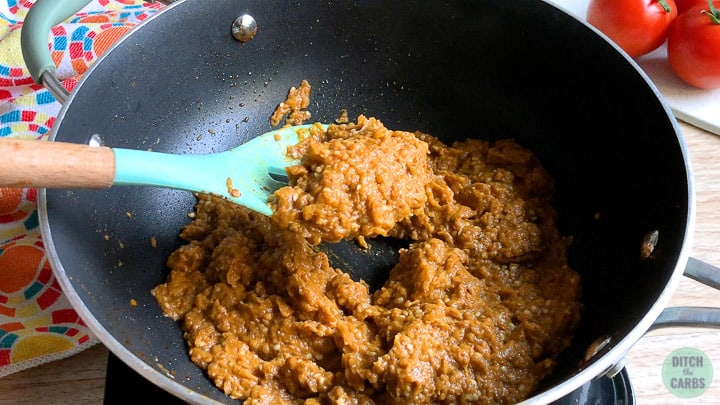 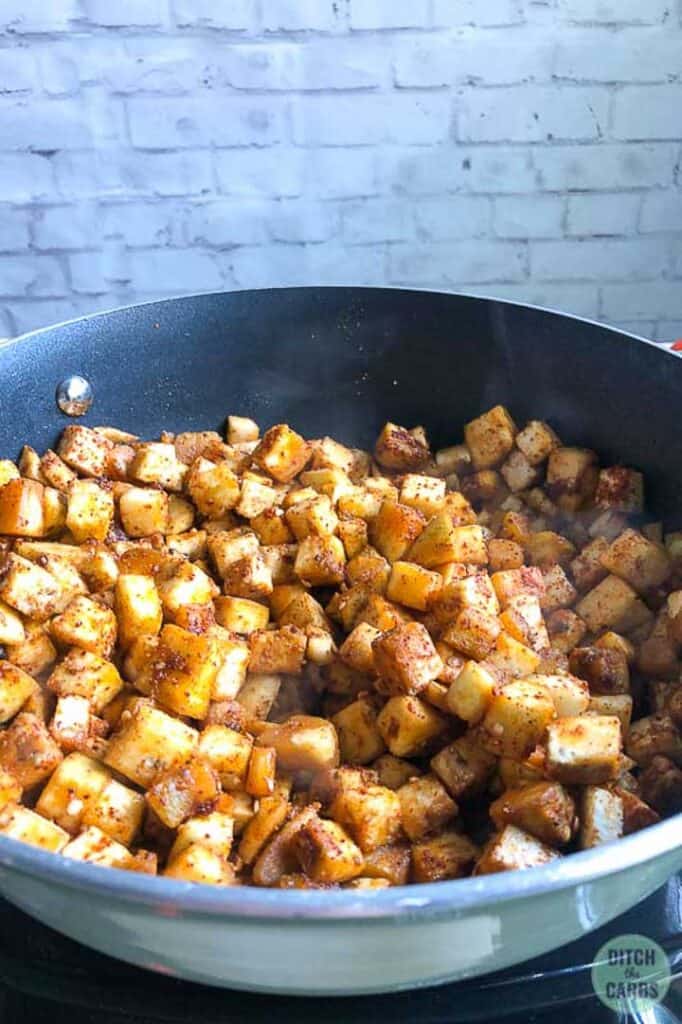 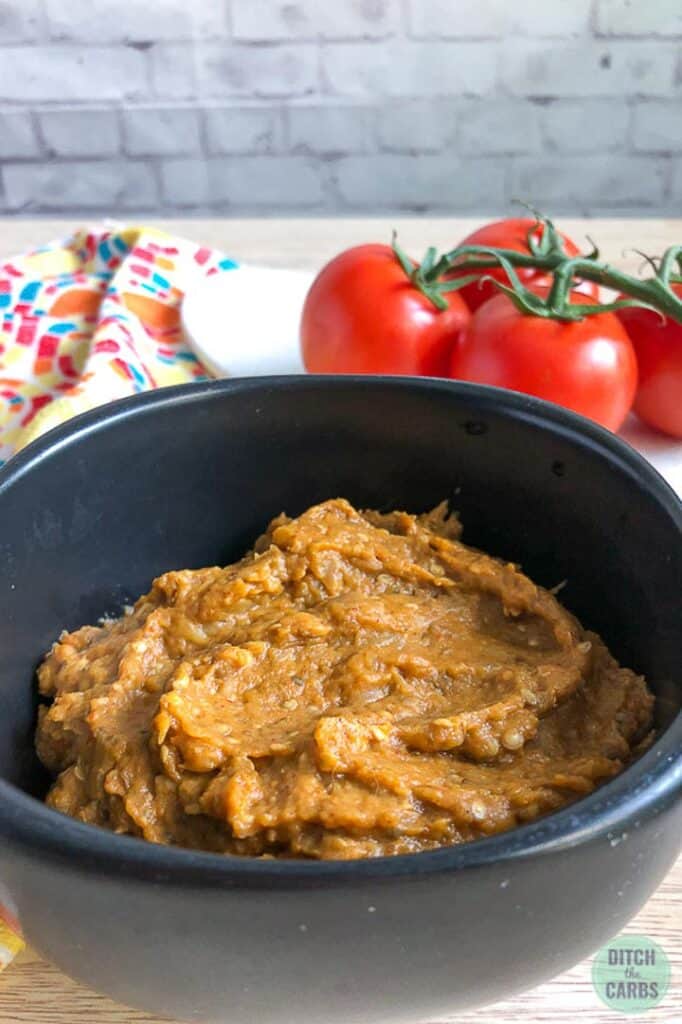 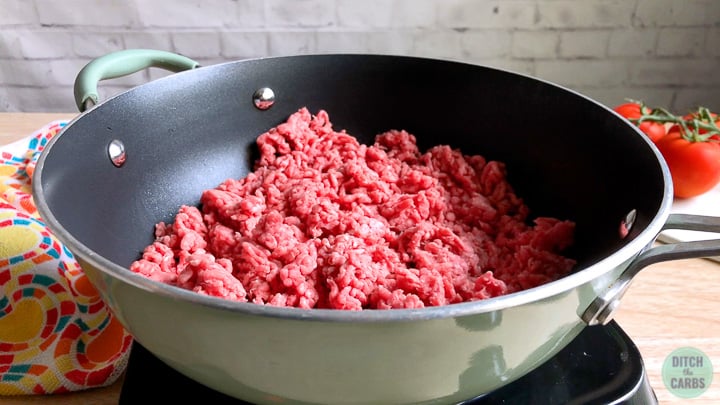 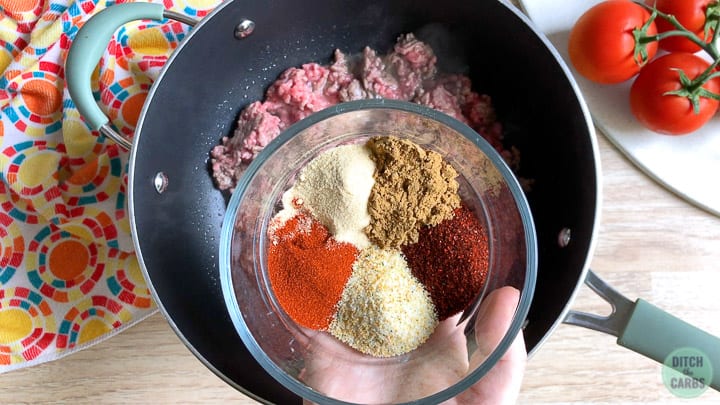 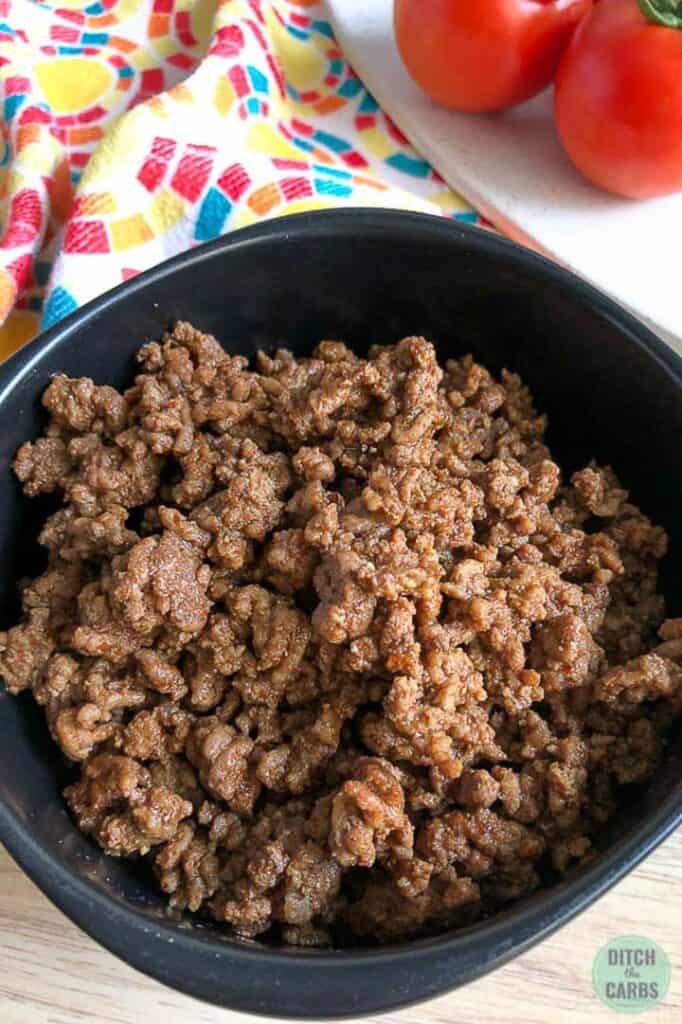 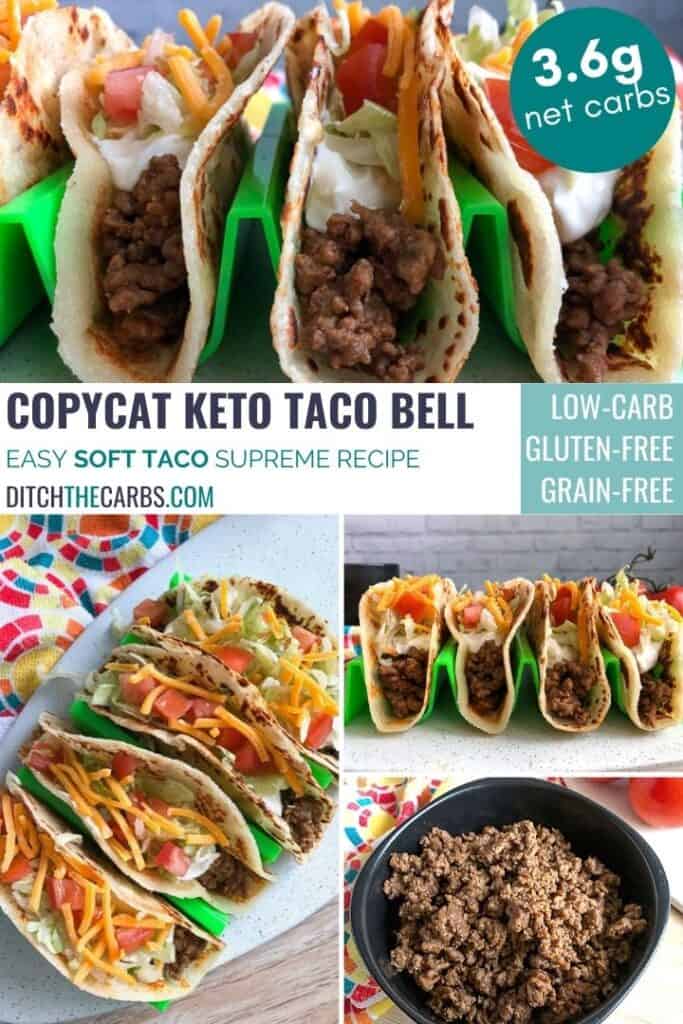 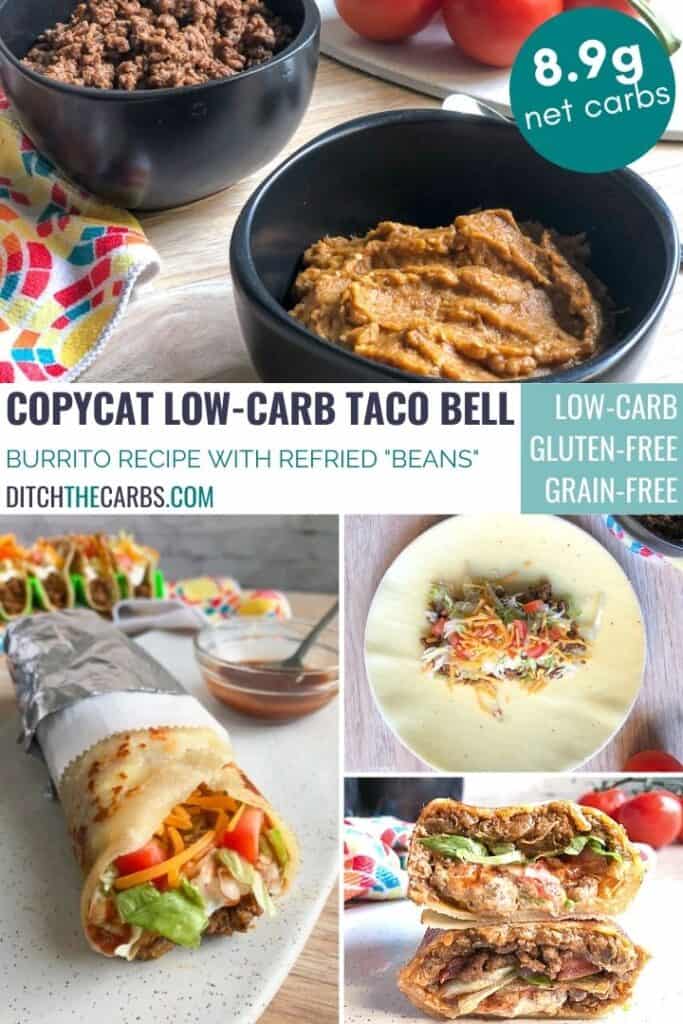 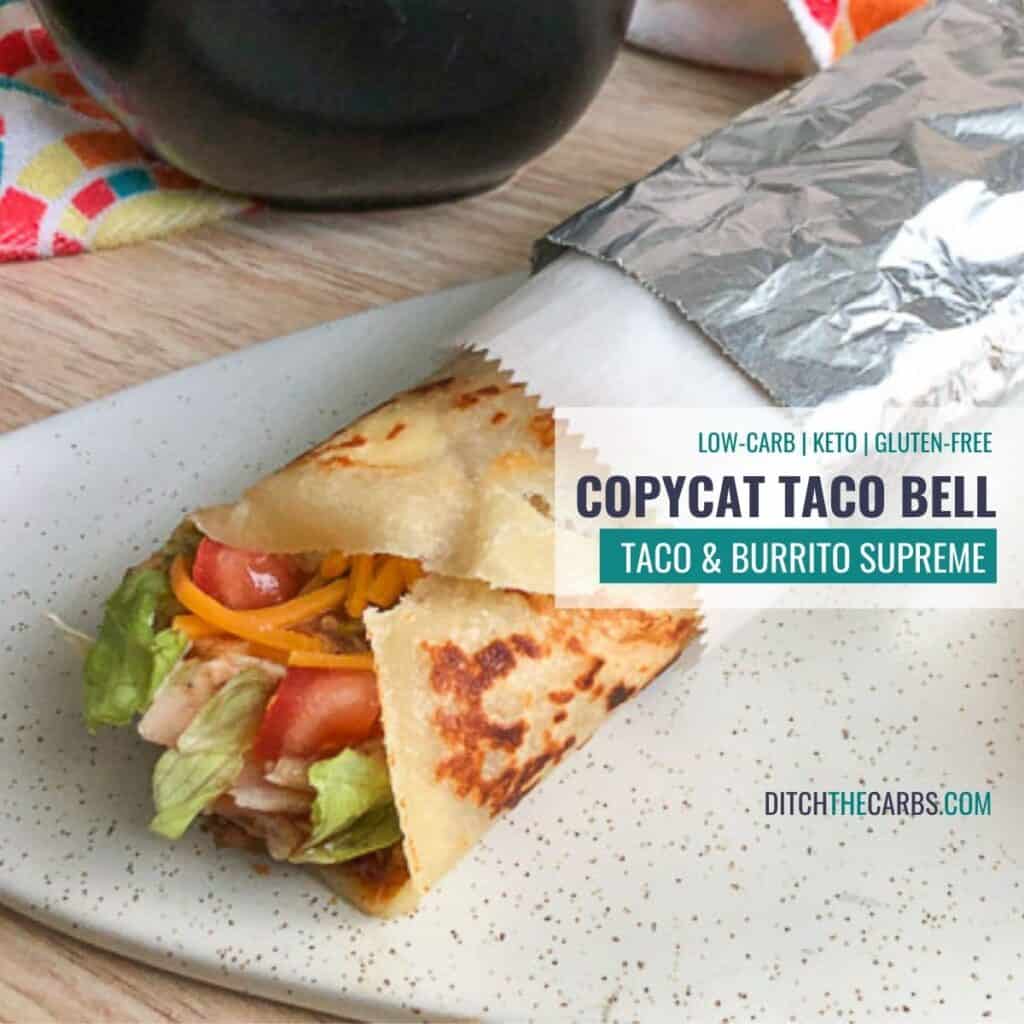 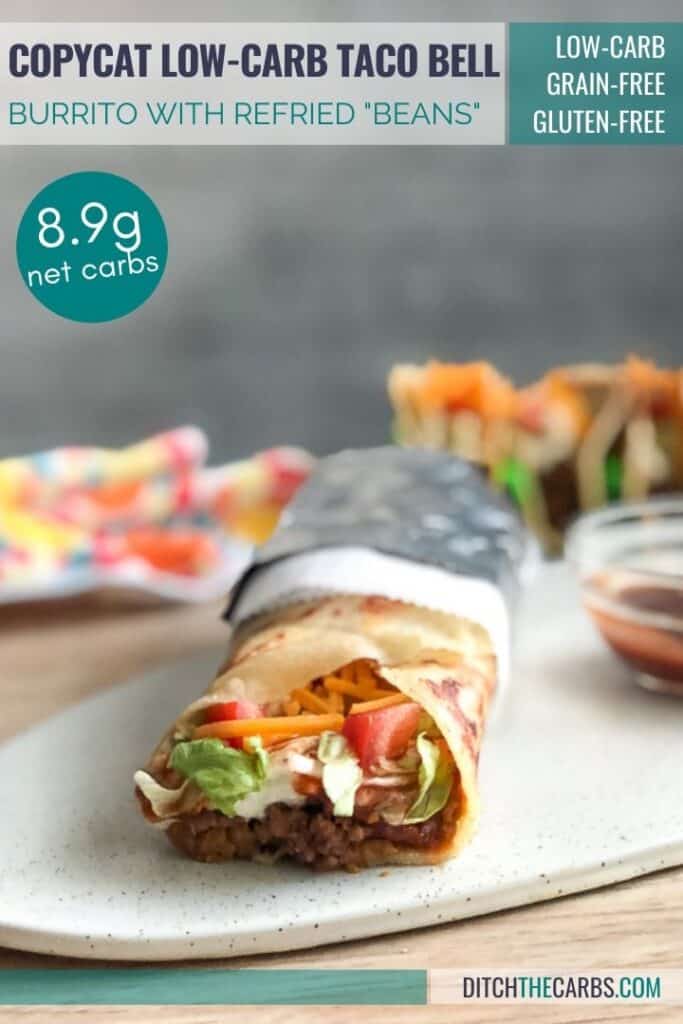 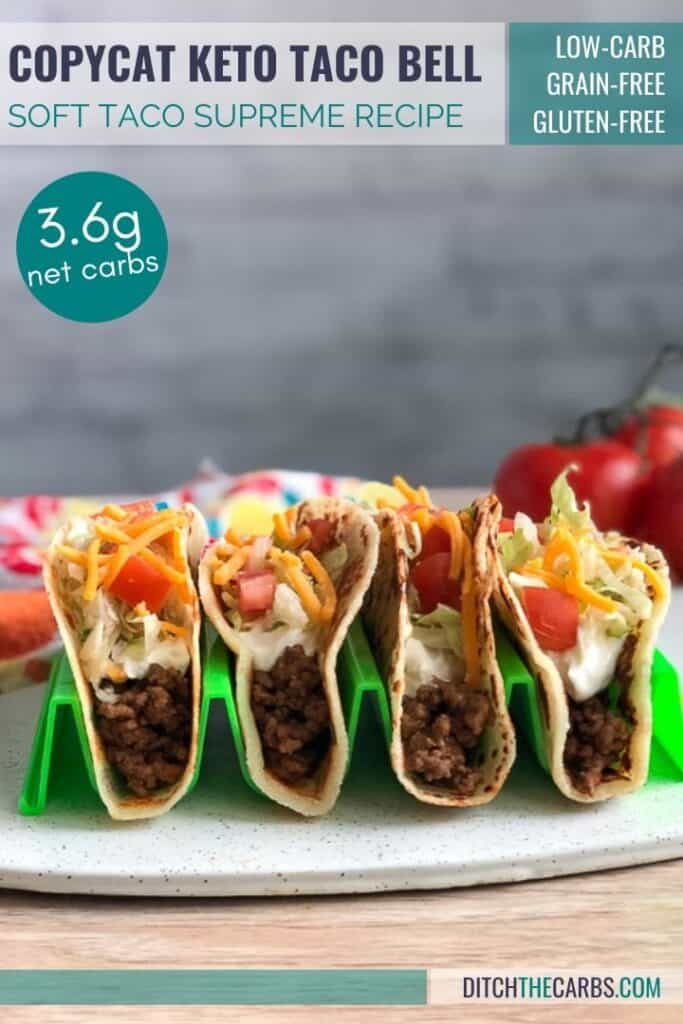 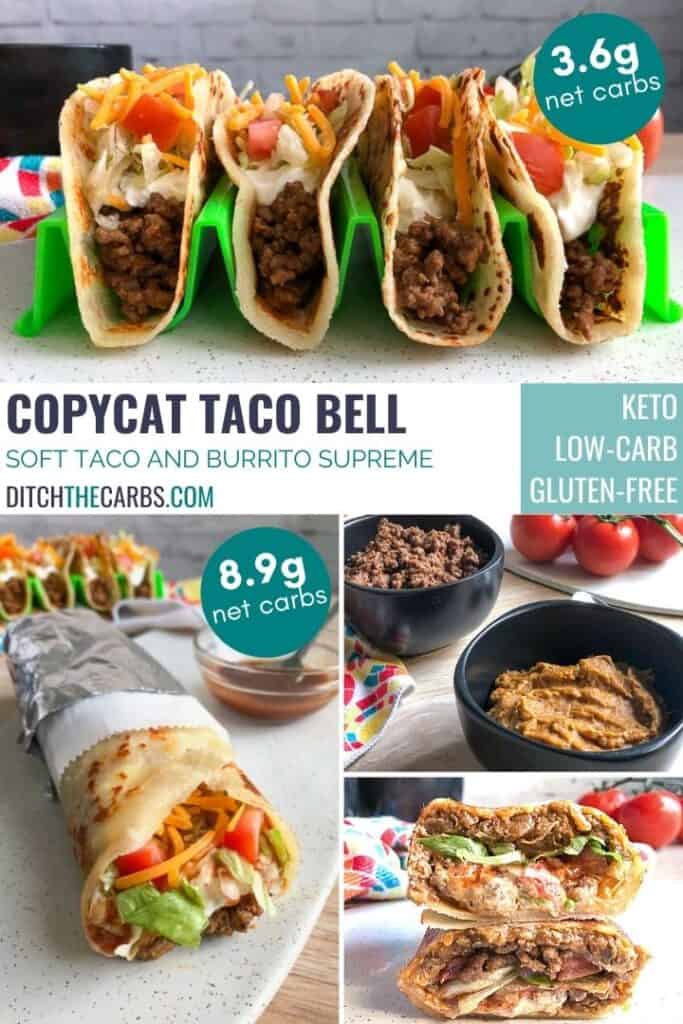 Yes, you can eat Keto Taco Bell with a few tips and tricks including Libby's secret keto tortillas!

With these copycat Taco Bell recipes, you can enjoy your favorite soft tacos with a warm keto tortilla for a net of 3.6g carbs. Looking for a low-carb option?

Check out my copycat low-carb Burrito Supreme that has only 8.9g net carbs.

These are a real crowd pleaser and family-friendly recipe you can make at home.

No. The high carb sides and the wheat flour tortillas are high definitely very high carb and will stop you from losing weight or reaching your health goals.

But, you have two easy choices to still enjoy Taco Bell, and stay on track with your keto diet.

You need keto tortillas, seasoned meat, and your favourite fillings and toppings.

Today I've got two options for you that will help keep you out of that drive-thru line. If you have been craving your favorite soft tacos or burrito, you are going to love these keto and low-carb options that will help you keep your carb count down.

Well seasoned taco meat is just a variation of spices and ground meat. To make this taco meat a little saucy like Taco Bell's beef taco meat, you will want to use 80%-85% lean ground beef. This ensures that your meat produces enough juice that your meat doesn't dry out.

You will need to use onion powder, garlic salt, chili powder, cumin, and paprika to season your meat. Be sure to break your meat into smaller pieces while you cook it.

When the meat is done cooking, scoop it into a bowl using a slotted spoon. The flavourful grease from the meat will be used to cook the refried "beans"

No, beans are a legume and are a high carb side dish. But don't worry, making low-carb refried beans is easier than you may think. These refried "beans" are made out of peeled and chopped eggplant that is seasoned and cooked in the juice from the taco meat.

Once the eggplant has cooked, it is then pulsed in a food processor until it is bean texture and then refried again on the stove.

At this point, you are probably skeptical of these beans. I was as well, but they really are tasty.

I won't claim that they taste like beans. Instead, they add the needed bean texture to your meals, without the carbs.

On their own, the beans taste like seasoned eggplant. However, mixed into a burrito they take the place of refried beans very well and no longer taste like eggplant.

How To Assemble Soft Tacos

To assemble your soft tacos you will first need to make a batch of Libby's keto tortillas. The tortillas only require 3 ingredients and a few minutes to make.

To assemble your soft tacos you will want to layer the meat, sour cream, lettuce, tomatoes, sour cream, and cheese inside each tortilla. Beans are not usually used in Taco Bell tacos.

Top your tacos with your favorite keto-friendly hot sauce and enjoy!

There are two ways that you can assemble your burrito. Both give an excellent result!

Method One: Assemble, Then Cook

The first way to assemble to burrito is to layer the beans, meat, sour cream, hot sauce, lettuce, tomatoes, and cheese into the middle of an uncooked Libby's Keto Tortilla.

Next, roll the tortilla into a burrito and place the burrito into the center of a warm skillet to cook for several seconds on all sides. This option of assembly is best if you want a crispy grilled burrito or if you are having a hard rolling the burrito after the tortilla is cooked.

The second way to assemble this keto Taco Bell burrito is to cook the tortilla first. Then, fill and roll the burrito while the tortilla is still warm.

If you assemble the burrito this way you will want to cook and assemble one burrito at a time to ensure they tortillas do not cool and remain easy to work with.

How do I roll a burrito?

The burrito should be placed seam-side down while you roll the rest of the burritos to ensure they stay rolled.

What Is The Best Way To Cook Burrito Sized Tortillas?

Taco-sized tortillas are easily cooked in a skillet on the stove. I can't say the same for burrito-sized to tortillas. The first couple of times I tried, my tortilla either stuck to the pan or stuck together. So to help you avoid the mistakes I made here are my tips for cooking large keto tortillas.

If you are cooking your tortillas in a skillet on the stove:

1) Make sure the skillet is large enough for the tortilla to lay flat in the skillet. 2) Grease your skillet a little with olive oil. Smaller tortillas are easily cooked on an ungreased pan but the same is not true for a large tortilla.
3) Fill and roll your burrito and then cook the filled burrito on the stove instead of just the tortilla.

Cooking Keto Tortillas in the Oven

Bake the tortillas for 2-5 minutes in the oven. Keep an eye on the tortilla because they cook quickly.

How Many Tortillas Can I Get From One Batch of Keto Tortillas?

Since the number of tortillas can vary depending on how big and thin you make your tortillas this recipe was written assuming you may only get 2 tortillas per batch. I recommend making your dough one batch at to see how many tortillas you are able to get and if you need more, make another or half batch of dough to get more tortillas.

How to Store Low-Carb Refried "Beans"

This means the beans are perfect for making ahead or using for meal prep. The seasoned taco meat can also be store in an airtight container in the refrigerator for up to 5 days.

Can I Use The Meat and Beans To Make Other Keto TacoBell Recipes?

The best way to figure out how to make other Taco Bell menu items is to Google the menu item and click on the Taco Bell link. You are usually able to see what ingredients are in that menu item so that you can duplicate it.

There are a few ways you can reduce carbs even further for these recipes.
1) Make your tortillas smaller or thinner. The more tortillas you get out of one batch of dough the lower your carb count per burrito or 2 tacos will be.
2) Use a smaller portion of "beans" or leave them out altogether.
3) Reduce the toppings you use. The carbs in your toppings add up. Using fewer toppings or leaving some of them out (especially the tomatoes) will reduce the carbs in your meal.
4) Make a tasty taco salad or burrito bowl. Serve the fillings over a bed of lettuce instead of wrapped in a tortilla.

The best part about these recipes is that they are customizable and the meat and "beans" can be used in many different ways! 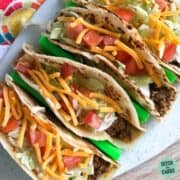 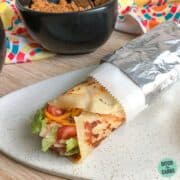