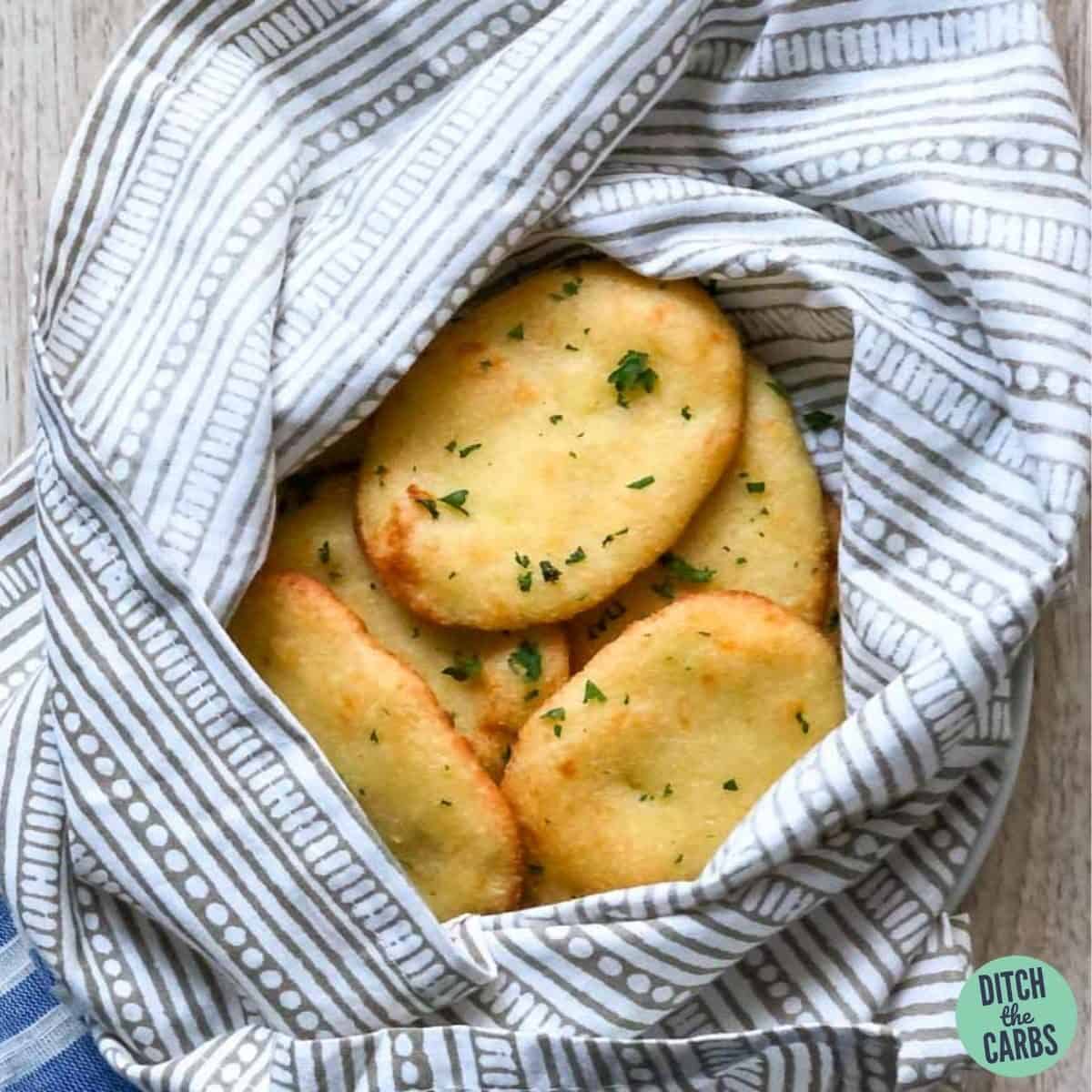 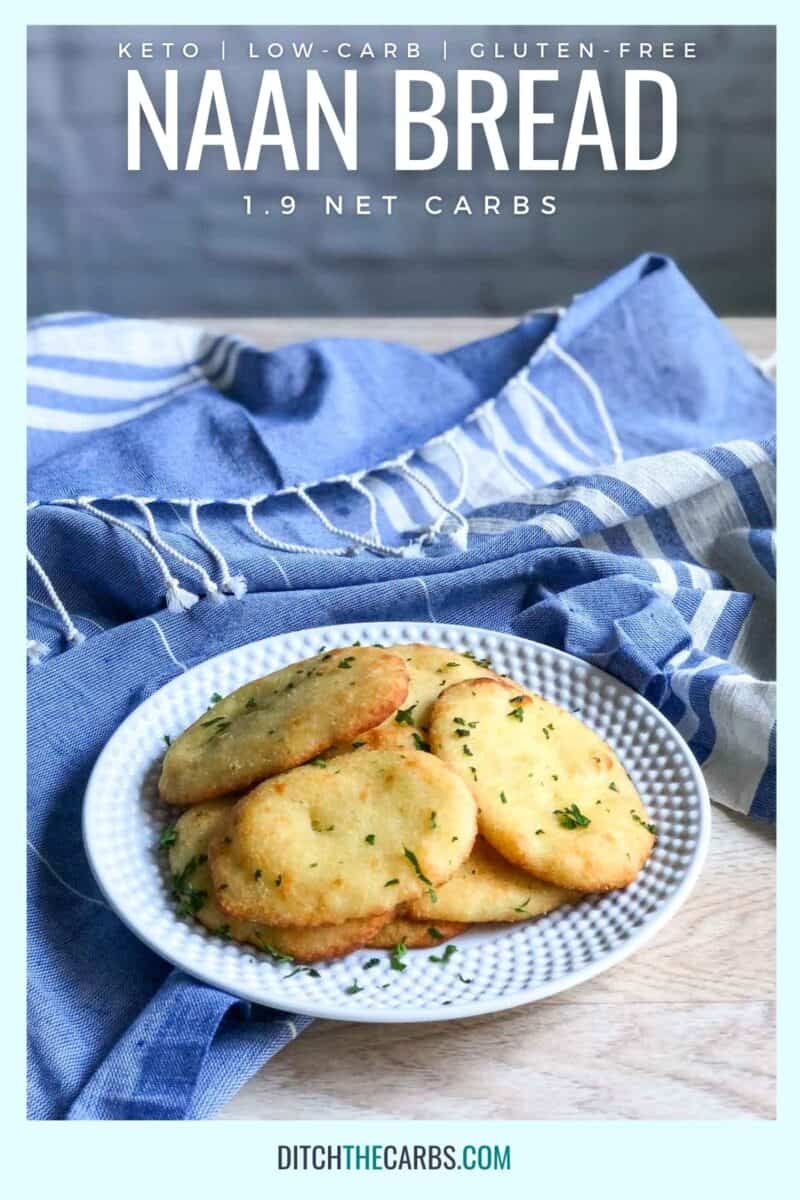 Delicious soft garlic keto naan bread is only 1.9g NET carbs and takes only 15 minutes. Made with almond flour so is a naturally gluten-free naan bread too.

It's the perfect addition to your Indian-inspired cuisine.

Even better? This keto naan bread is absolutely delicious. The bread is rich and has a garlic butter flavor I can't get enough of. Dip it into your curry, or enjoy with some cauliflower rice.

Naan bread is a delicious flatbread that is often paired with food from a variety of cultures such a curry, butter chicken, tandoori, tikka masala, and various dips. It is a soft bread that can be torn and folded to pick up bites of food.

This particular keto naan recipe was inspired by my easy keto roti flatbread, Fat Head dough recipes and my keto garlic bread on this site, and pairs well with this Slow Cooker Beef Rendang and Pumpkin and Coconut Soup.

Keto naan uses similar ingredients to other Fat Head dough recipes. For this naan recipe, you will be using yogurt in your dough instead of cream cheese with the addition of baking powder.

This will help keep your bread soft which is important in gluten-free bread.

See the recipe card below for quantities.

To make keto naan bread start by preheating your oven to 191C/375F.

While the oven is preheating start making your dough by mixing together your cheese, almond flour, and yogurt in a bowl.

In a separate bowl whisk your egg and baking powder together. Set the egg mixture aside until ready to use.

Place your bowl of cheese mixture in the microwave and melt for 1 minute then fold the dough with a spoon or spatula to combine. Place the keto naan bread dough back in the microwave for 30 seconds.

Next, add the egg mixture to your dough while it is still hot. Fold and knead the dough with your spoon or spatula until the egg is absorbed and the dough is only slightly sticky.

Cut the dough into 10 equal parts and roll each section into a small ball. You can do this on a floured surface (with blanched almond flour) or on parchment paper.

Next, use your hands to flatten each ball of dough and form it into an oval about 8mm thick (¼ inch).

Arrange the keto naan bread on a sheet of parchment paper on a baking sheet and place it in the oven. Bake on the top rack for 8-10 minutes until the edges start to become golden.

Then, remove your naan bread from the oven, brush with seasoned melted butter and place back in the oven another 1-2 minutes to golden a bit more. Loosely wrap the cooked keto naan in a towel to keep warm until you are ready to serve.

Hint: bubbles may form on your keto naan while it bakes. Pop any bubbles you see with a fork and press it flat. If it seems like your naan is cooking too quickly move the baking sheet to a lower rack in your oven.

Below you will find a few substitution recommendations that you may find helpful to make this keto naan bread recipe meet your dietary needs.

Make this keto naan bread to meet your needs. Just like traditional naan bread, you can change it up! Maybe you need a large bread, a tasty twist, or a want new use for keto naan.

Check out our recommended naan variations below.

This is one of my all-time favorite keto bread recipes thanks to the versatility. How delicious would this slow cooker buffalo chicken wrap on my website be with naan dippers?

I used a microwave to help me quickly melt the mozzarella cheese while making the dough. This is the easiest method for me.

I know some readers don't have a microwave and might still want to make this naan bread. The cheese can be melted using your stove.

Place the mozzarella cheese, yogurt, and almond flour in a saucepan and melt on LOW heat while continuously stirring to prevent burning.

Once the cheese is melted and soft you can remove the pan from the heat and fold in your egg mixture. Then make your keto naan bread following the remaining directions.

Keep your low-carb naan bread warm until you are ready to serve it by wrapping the bread in a towel to trap the heat.

This garlic naan bread can also be frozen for up to 3 months. Defrost the naan on the counter before toasting the bread to reheat.

You'll be working with a hot dough to make this keto naan bread. I recommend using a silicone spatula to mix and knead the dough until it is cool enough to touch without burning your hands.

Kneading the dough while hot is important to be able to fully mix the egg into the dough, but feel free to use your hands once it has cooled a bit. Enjoy!

Is naan high in fat?

A piece of this naan has 11.5 grams of fat. I wouldn't necessarily call that high fat, but there is a decent amount thanks to the yogurt and butter. You can up the fat by creating a garlic melted butter dip for your bread.
If however, you want to reduce the fat, then only brush half the garlic butter onto the garlic naan bread.

What should I serve with naan?

This dish is absolutely lovely when served with curries or stews. I highly recommend this keto lamb curry, Slow Cooker Beef Rendang, and my Pumpkin and Coconut Soup. Don't forget to make a side of fluffy curry cauliflower rice too!

Can you eat curries when on a keto diet?

Perfect for a Friday night curry, are keto curries. Serve with cauliflower rice, naan bread, and a keto samosa, and you have a keto banquet at your table. 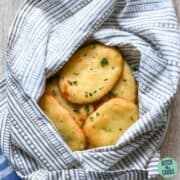