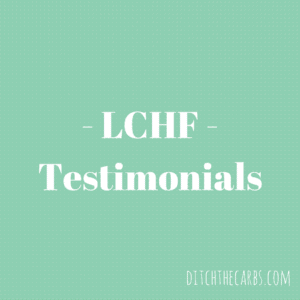 Here is a page dedicated to LCHF testimonials. Leave a comment on how LCHF has worked for you. Your story may just inspire one more person to give LCHF a go. It may just help one more person regain their health and reduce their medication. It may just help one more person to lose that weight they have struggled to lose all their life. If you are starting LCHF today for the very first time, imagine yourself in 6 months and what changes you have made and the health benefits you have gained. You can do this. Little by little, step by step, strive for improvement, not perfection.

If you are new here, this page may help answer the questions you may have, and this page will help you get started. Get ready to stock your pantry and let's do this. There is so much support, tip and tricks over on Facebook, so join us there too and subscribe for FREE recipes each time I post them.

I would love you to share my website with friends and family who need some help with weight or health issues. As a registered pharmacist, I truly believe I have helped more people in the last 2 years reduce (and in some cases stop) their medication, than the last 25 years dispensing it.

With many thanks, Libby x