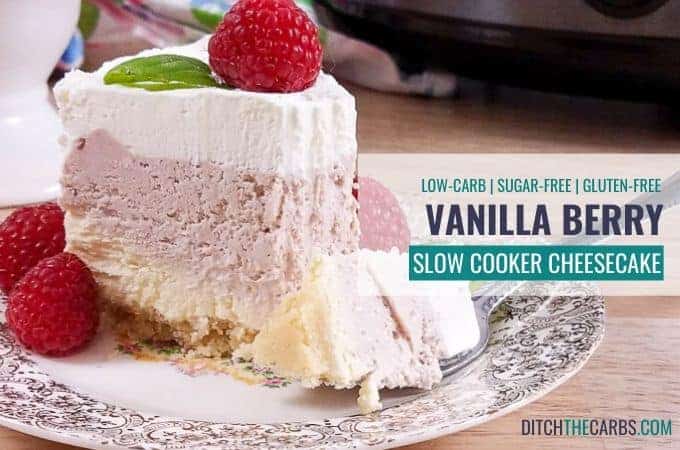 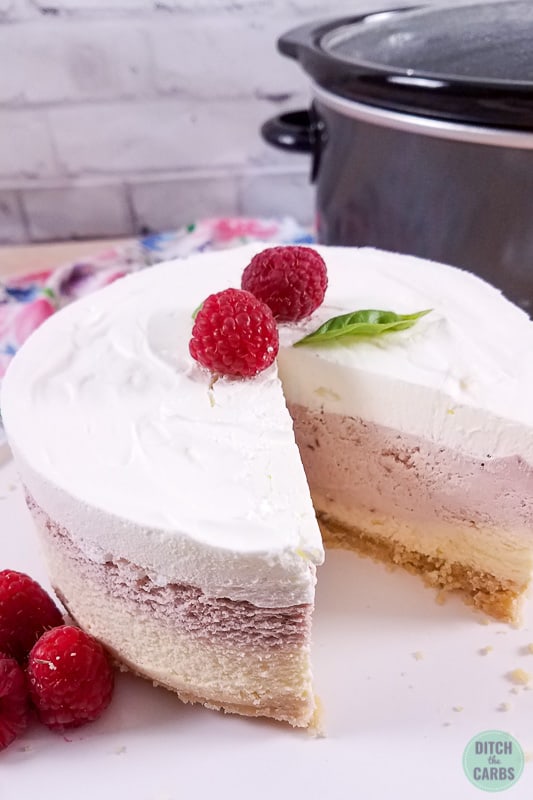 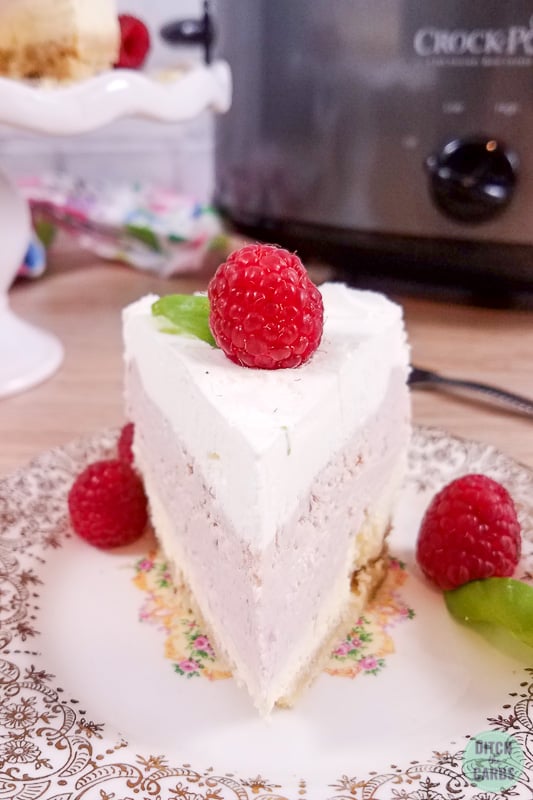 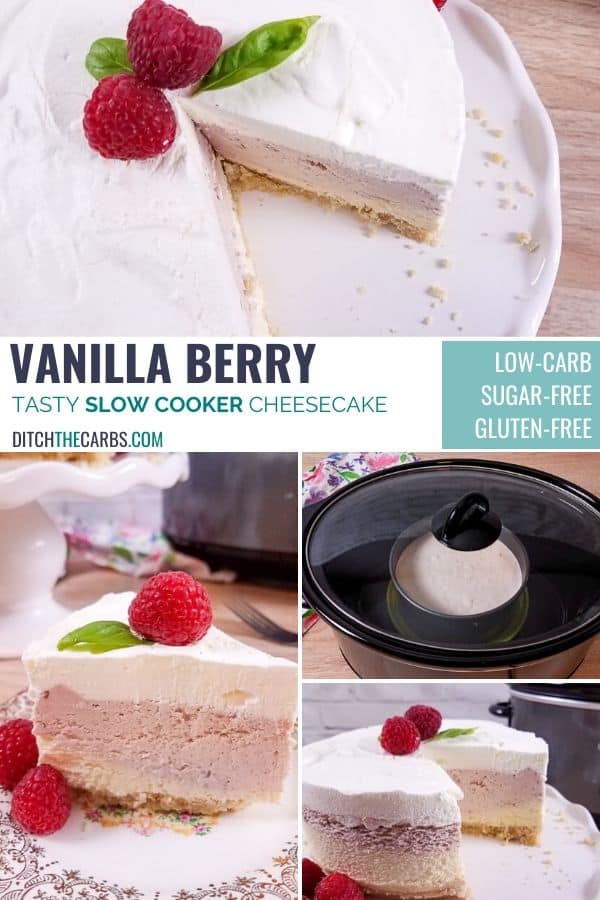 Cheesecake lovers ... slow cooker vanilla berry cheesecake will become one of your favorite ways to cook a cheesecake.

It's low-carb, keto-friendly, sugar-free, and gluten-free. Only 5.7g NET carbs per slice.

Regular cheesecakes are not keto, because they are packed with sugar and wheat flour. But this easy cheesecake recipe is one of the best low-carb, keto-friendly, sugar-free, and gluten-free desserts you can make.

When you visit friends and family, especially during the holidays, always offer to bring a sugar-free and keto dessert so you can control the highest area of sugar in the family meal ... the dessert.

So if you have a sweet tooth or need to bring a dessert for a party this cheesecake recipe is for you.

Vanilla berry cheesecake looks beautiful but is really simple to make and isn't going to take a whole lot of effort.

As with any cooked cheesecake, this dessert will need to sit in the refrigerator overnight for the texture to be creamy, so plan accordingly.

Why are slow-cooker cheesecakes so good?

You may not have thought about using a slow-cooker to bake a cheesecake before, but there are definitely some benefits to using one.

The first benefit is that the temperature in a slow cooker is very steady.

You can easily create a steam bath to cook your cheesecake, and it doesn't take a significant amount of time to cook.

Another reason to might want to use a slow cooker instead of the oven is to avoid heating up your house.

When baking a cheesecake in the oven you may end up running your oven for about an hour. That amount of time can really heat up your kitchen and waste a lot of energy or gas.

A slow cooker cheesecake only takes about  1-2 hours to cook and won't turn your kitchen into a furnace.

How to prepare the perfect cheesecake crust

The crust for this cheesecake is pretty simple. You will want to mix together the almond flour and melted butter in a bowl and then press the crust firmly into the bottom of the loose bottom cheesecake pan.

Once the crust is firmly pressed down place it is in the freezer to harden while you make your filling. Hardening the crust is important to ensure your crust doesn't get soggy while it cooks.

How to make cheesecake filling

To make the filling toss all your filling ingredients together except the eggs and berries into your food processor and blend until it is smooth.

Next, open the lid and add the eggs.

Blend the filling again for a few seconds to mix in the egg.

Then remove your crust from the freezer and fill it with HALF the filling mixture. Tap your cheesecake pan against the counter several times to level your cheesecake.

Next, toss the berries into the food processor with the remaining filling and blend together for several seconds until the filling turns pink.

Pour the remaining filling while filling to create two layers of the cheesecake. Tap the pan on the counter again several times to level out the filling.

Your cheesecake is now ready to bake. Add a cup of water to your slow cooker to create a steam bath for your cheesecake as it cooks.

Cover your slow cooker with the lid and cook your cheesecake on HIGH for 1-2 hours. Your cheesecake is done when the top is baked but the center is still jiggly. My cheesecake took about 1 ½ hours to cook.

When the cheesecake is done cooking remove the pan from the slow cooker and let it cool on the counter for an hour before moving it to the refrigerator.

Your slow cooker cheesecake needs at least 8 hours to settle, preferably overnight, before it will be ready to serve.

How to decorate your berry cheesecake

To complete the look of the low-carb cheesecake I like to add a layer of sweetened sugar-free whipped cream on top of the cheesecake.

If you have a hard time removing the cheesecake from the pan, let the cheesecake pan sit in a shallow bowl of water for a few seconds to soften just the sides. Your cheesecake will pop right out in a beautiful layer.

Your cheesecake will last in the refrigerator for 4-5 days. Feel free to freeze any leftover cheesecake in individual slices for a few weeks so that you can have a slice whenever you want a treat. Enjoy! 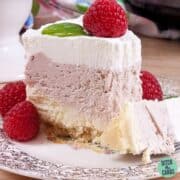