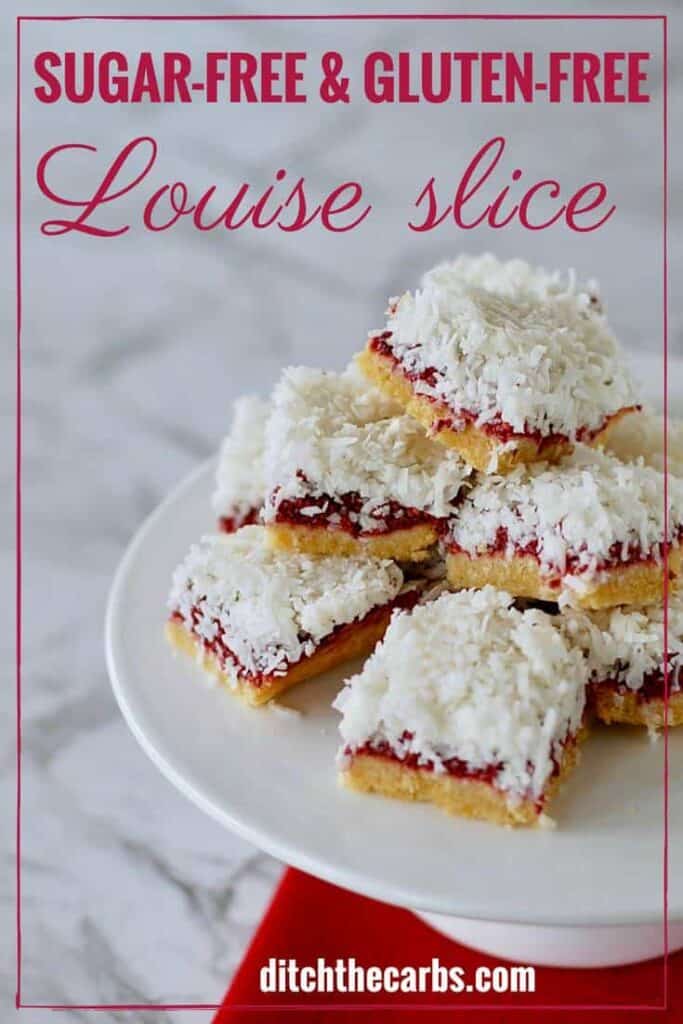 It's a sweet shortbread crust, covered in sugar-free berry jam/jelly then covered in a sweet coconut baked layer.

What is a Louise slice (Louise cakes)?

Brought to New Zealand by British settlers, the recipe has been used throughout the centuries and is still being made in today’s kitchens – like mine!

What are the 3 layers in a Louise slice?

A Louise slice is typically made with a thin base layer of cake or biscuit crumbs topped with raspberry or plum jam, coconut meringue; then baked in a rectangular pan in the oven and cut into squares (hence why it’s called a “slice” rather than cake).

But in reality, families across New Zealand will have made their own special recipe for years, and all these different versions in the long span of time make the cake slices all the more special.

You can enjoy this sugar-free gluten-free Louise slice for any occasion like anniversaries and parties – and you can even pack a square or two in your lunchboxes for school and work!

And of course, Louise slice is always to be found at a school bake sale - so bring a healthy sugar-free gluten-free Louise slice instead.

Making a sugar-free gluten-free Louise slice – or of any dish, for that matter – was far from the imaginations of its originators, but I bet that they would enjoy this healthier version nonetheless.

As well as being sugar-free, this delicious Louise slice recipe is also gluten-free! If you are new here you may wish to read Gluten free vs Grain Free.

What is gluten? Gluten is a type of protein that can be found in many grains and flour which is avoided when on a low-carb diet or keto diet.

Although gluten aids in maintaining the elasticity of the food it’s in and makes them chewier, it is worth giving it up entirely due to the effect gluten has on bloating, stomach pain, and your ability to absorb some nutrients.

Giving up on grains (and therefore gluten) greatly improves your digestive health and helps with healthy weight loss and appetite control, for starters.

And because grains (and gluten) can be found in so many ultra-processed and unhealthy junk food, you’ll be sure to eventually eliminate these nasty products from your kitchens when living low-carb.

Like my other desserts such as no-bake lemon cheesecake and low-carb carrot cake, this healthy low-carb Louise Slice has no added sugar – without having to skimp on taste! Just because a cake is sugar-free doesn’t mean that it takes excitement and taste from it. 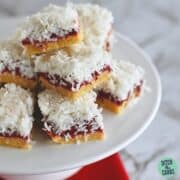 I would suggest making the sugar-free chia jam the night before, or at the beginning of this recipe, so it has time to swell and thicken.