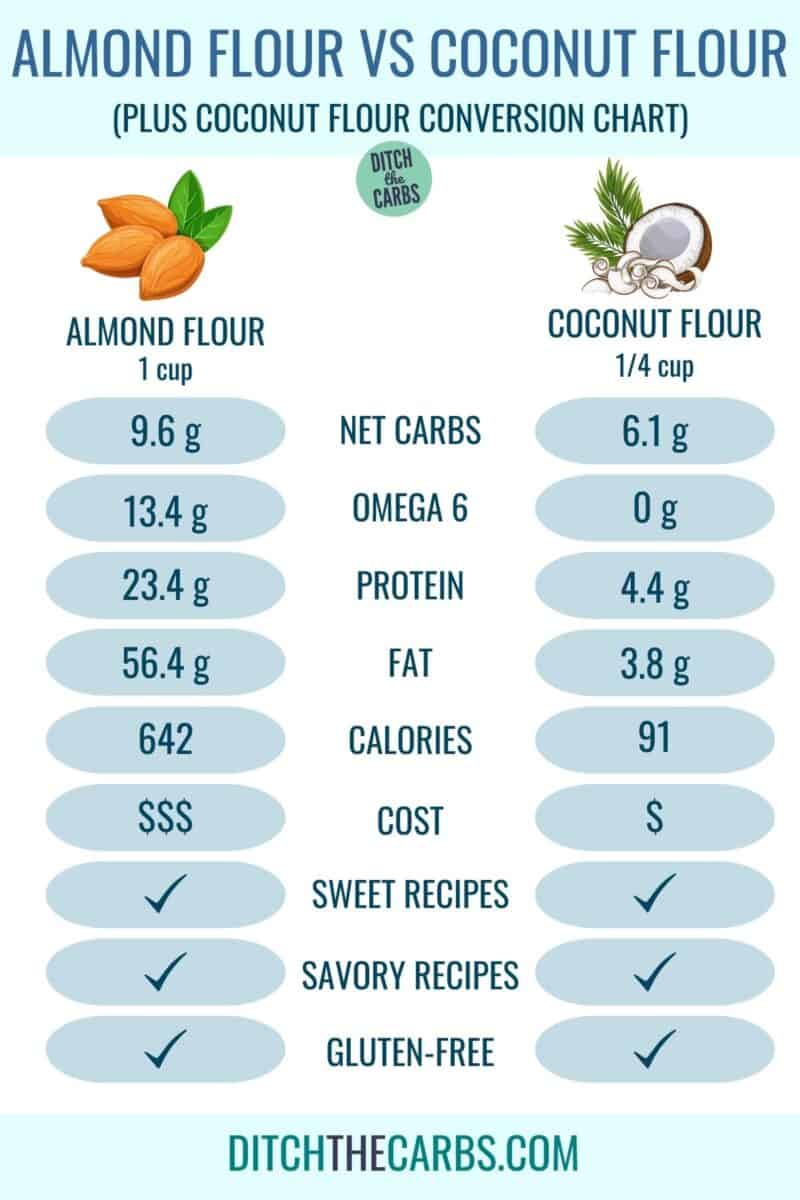 What's the difference between coconut flour vs almond flour? Which is better for keto?

Use the EASY coconut flour conversion chart and learn to AVOID the number one mistake most people make PLUS the top 10 best coconut flour recipes.

What is coconut flour?

Coconut flour is dehydrated and defatted flesh from the coconut (coconut meat). It is the high fiber by-product of making coconut cream and coconut milk.

The dried coconut pulp is ground to make a super-fine flour that is naturally high fiber, low-carb, low-fat, and naturally gluten-free flour.

How does coconut flour work?

Coconut flour is dehydrated so is incredibly absorbent and so recipes will require more liquid.

Extra eggs are required to help improve the texture of the baking and to help the cake to rise. These extra eggs also help the coconut flour recipe to be high-protein.

You must allow a cake batter made with coconut flour additional time to absorb these extra wet ingredients so the cake batter can swell and thicken.

What is almond flour?

Almond flour is made from ground whole blanched almonds and is the most common keto flour used by beginners.

It takes 90 whole almonds to make 1 cup of almond flour.

Almond flour is a natural gluten-free flour commonly used in keto baking. It has a slightly sweet flavor and nutty flavor with a similar texture to traditional flour.

It is versatile because it can be used in sweet recipes such as cakes, cookies, and pancakes, or savory recipes such as garlic bread, almond flour pie crusts, and is a great replacement for breadcrumbs in recipes such as keto chicken nuggets, keto crumbed pork and grain-free keto fried chicken (KFC).

What's the difference between almond flour and almond meal?

Almond flour is creamy colored and is finely ground almonds, usually with the skins removed.

Almond meal is darker colored and is a coarser grade of ground almonds, usually with the skin attached.

They can both be used interchangeably in most recipes but almond flour is preferred for soft delicate cakes, and almond meal is best used in savory recipes.

What are the best low-carb flours to use?

There are so many benefits of using natural coconut and almond flour over traditional wheat flour.

When you are on a keto diet or monitoring your blood sugar, baked goods made with grain-free flours have all these health benefits.

3 benefits of baking with coconut flour vs almond flour

Coconut flour recipes are allowed in most schools that have a nut-free policy.

If your children attend a school with a nut-free policy, baking with nuts is out of the question.

And because so many low-carb recipes use almond flour/meal, this limits what baking you can send your children to school with.

Coconut flour is cheaper than almond flour (and you use less).

Coconut flour is an economical low-carb flour to buy and to use because you only use ¼ of the volume of almond flour.

Coconut flour is almost half the price of almond flour/meal.

Coconut flour is lower in fat.

Almond flour has a higher fat content but it is the quality of fat that is important.

Almond flour is high in omega 6 which is the pro-inflammatory polyunsaturated fat that we want to avoid in large quantities.

This isn’t so important when you are just eating a few almonds as a snack, but to rely on cups of almond meal/flour for meals and baking, really does make a difference and adds up quickly.

"Excessive amounts of omega-6 ... promote the pathogenesis of many diseases, including cardiovascular disease, cancer, and inflammatory and autoimmune diseases, whereas increased levels of omega-3 PUFA (a low omega-6/omega-3 ratio) exert suppressive effects." Source.

Conclusion: Coconut flour is versatile, cheaper, healthier, has better omega 3:6 ratios, and is far lower in carbs than almond flour.

If you think "coconut flour sucks" then you need to learn these 3 tips.

Coconut flour is made from dehydrated and defatted coconut meat, so it is very absorbent.

When you make cookie dough or cake batter, the mixture needs to rest and swell to absorb the moisture and thicken.

Coconut flours need plenty of eggs to provide moisture, protein, and structure, and to help a keto cake rise and stay fluffy.

Some people are sensitive to the subtle flavor of coconut flour and the extra eggs. You may need to add extra vanilla extract or sweeteners in sweet recipes or additional chees, herbs, and spices in savory recipes to override the subtle coconut flavor it has.

How to swap almond flour for coconut flour?

Unless you are very experienced at low-carb cooking, you cannot directly substitute coconut flour in almond flour recipes or regular wheat flour.

I recommend that you begin to bake with coconut flour using recipes that have already been developed using coconut flour.

How to substitute almond flour for coconut flour

Every recipe will vary but as a rough guide to get you started to substitute almond flour, 1 cup of almond flour = ¼ cup of coconut flour PLUS extra eggs and extra liquid.

If you love cooking with coconut flour, these are the 10 most popular and easiest coconut flour recipes for beginners.

The almond flour debate in keto recipes depends on whether you have tree nut allergies, whether you want low-fat flours, or high-fiber flours, or whether calories and weight loss are a priority.

Is almond flour or coconut flour better for cakes?

Finely ground almond flour is more popular in keto cakes and Paleo baking, but if you have nut allergies and can tolerate coconut flour, almond flour, and coconut flour cakes can both be soft and delicious.

Can I replace almond flour with coconut flour?

You can use the coconut flour conversion table above as a guide but it is not easy to swap almond flour with coconut flour or conventional flour. They have completely different properties.

Is coconut or almond flour better for keto?

Coconut flour is lower in net carbs, higher in protein, and has fewer calories so better for the keto diet.

Where to buy coconut flour or almond flour (and what to look for)?

You can buy all types of keto-friendly flours worldwide from iHerb or from my Amazon Low-Carb Keto Store.

Organic coconut flour is the best if you can afford it, and make sure you buy coconut flour not desiccated coconut. They are not the same.

Buy almond flours such as blanched almond flour, or almond meal, in small enough quantities that you will use it before its expiry date.

Can you make your own coconut flour?

You can but it takes a very long time and it will never be as good as store-bought coconut flour.

How to make your own almond flour?

Buy blanched almonds and place them in your food processor or coffee grinder and chop until they are ground. This is called almond meal. When grinding almonds make sure to stop before they turn into almond butter.

How often should you eat keto baking?

Low-carb keto baking, whether it is from coconut flour vs almond flour, should not be relied upon regularly. Part of the ethos of going low carb is not to rely on sweet tastes too often, but to use them occasionally.

It is always better to reach for keto baking rather than high-carb high-sugar cakes and cookies. But they must begin to make less of an appearance in your weekly meal plan

Which flour is best for those with celiac disease?

One of the biggest challenges in a gluten-free diet is which type of flour to use. You need to avoid all grain-based flours and whole wheat flour. All low-carb flours and keto flours are naturally gluten-free.

What can I use in place of almond flour?

Alternative types of flour are ground sunflower seeds, ground flaxseeds, psyllium husk powder, flaxseed meal, oat fiber, and other nut flours such as walnut flour. All are low in grams of net carbs and suitable for the ketogenic diet.

Which flour has the highest grams of protein?

Almond flour has 23.4 grams of protein per cup.

Which flour has the lowest grams of carbohydrates?

Coconut flour has 16 grams of total carbs, 10 grams of fiber, and a net carb count of 6.

Why do some keto recipes use xanthan gum?

Xanthan gum is a thickener and is often used in sauces but also used in baking to help replace gluten otherwise some gluten-free cakes and cookies will crumble and fall apart.